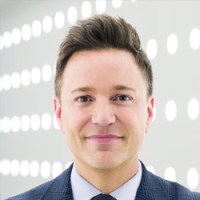 Darren first began his career as an intern at iHeartMedia’s WASH-FM in Washington DC 27 years ago. He grew into the Program Director role at WASH-FM when he was just 23 years old and has since worked as Regional Vice President of Programming for iHeartMedia Detroit and Chicago. He has worked his way up through the company as Senior Vice President of Programming to his previous role as Executive Vice President and General Manager of National Programming. Darren graduated from The George Washington University in 1995 and is currently based in New York City.

Outside the company, Darren serves on the boards of the Radio Advertising Bureau, the New Jersey Broadcasters Association, the National Association of Broadcasters’ Digital Officers Committee, and the National Radio Hall of Fame. He’s a perennial honoree in Billboard Magazine’s “Digital Power Players” List and Radio Ink Magazine’s “40 Most Powerful People” List.