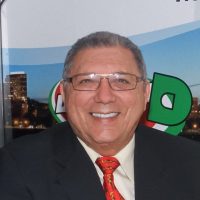 President of Bustos Media Holdings, LLC which owns 25 radio stations. Most are Spanish language but some of his stations in Portland, Oregon serve the Russian speaking community and his stations in San Jose, California and Houston Texas serve the Vietnamese and Korean-American community.  Mr. Bustos is currently on the NAB and BMI Boards.  In June 2010 he was honored with the “American Dreamer Award” by the Merage Foundation for his contribution to America’s ethnic media.