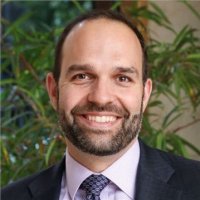 Curtis LeGeyt is chief operating officer of the National Association of Broadcasters. In this role, he is involved in all aspects of NAB’s work on behalf of free, local television and radio broadcasters. He previously served as executive vice president, Government Relations before being named to his current role in 2020.

Prior to joining NAB, Curtis served as senior counsel to Senate Judiciary Chairman Patrick Leahy (VT). In that role, Curtis advised the chairman and committee on intellectual property, antitrust and first amendment issues. Previously, Curtis worked on antitrust litigation and merger reviews as an associate with the Howrey LLP law firm in Washington, D.C., as a management consulting associate with Putnam Associates and on the staff of the 2008 Obama For America presidential campaign.

Curtis received his J.D. from Cornell University Law School and his B.A. from Providence College in quantitative economics.