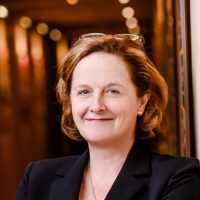 Ginny Morris is the Chair and CEO of Hubbard Radio LLC, and has more than 30 years of broadcast industry, business and general management experience. In her role, she is responsible for strategic direction for Hubbard’s 43 radio stations throughout the United States.

Part of the Hubbard family, pioneers in the broadcast industry, Morris originally joined the family owned and operated company in 1982 and worked her way to management positions before becoming president and general manager of KSTP-FM and KSTP-AM in 1995.

Highly regarded in broadcasting circles as well as in the Minnesota business community, Morris currently serves on the Board of the Radio Advertisers Bureau (RAB), Broadcast Music Inc. (BMI) and the Library of American Broadcasting. She also serves as a board member for Greater MSP, the University of Minnesota Foundation and the University of St. Thomas.  Morris is a former chair of the NAB Radio Board and the Minnesota Chamber of Commerce.