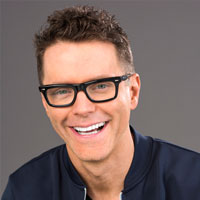 Born and raised in Arkansas, Bobby Bones began his radio career at Henderson State University’s KSH 91.1 The Switch at the age of 17, where he graduated with a degree in Radio/TV.  During that time, he also worked at KLAZ 105.9 in Hot Springs, Ark., as a part-time air talent.  In 2002, Bones was hired by Q100/KQAR in Little Rock, Ark., and The Bobby Bones Night Show was born.  The following year, he moved to Austin, Texas where he began hosting The Bobby Bones Show Monday through Friday from 5-10 a.m. CT on 96.7 KISS FM.  Joined on-air by Lunchbox and Amy, they attracted listeners in droves, as well as top rankings in the market.  For his work on the program, Bones was named “Austin Radio Personality of the Year” in 2009, 2010 and 2011, and Austin’s Alliance of Women in Media honored the program with their “Radio Personality of the Year” award seven years in a row.

The Bobby Bones Show joined Premiere Networks’ national lineup in 2011 and was nationally syndicated on CHR radio until February 2013 when the program transitioned to a Country format.  Today, the program originates from WSIX in Nashville and can be heard on nearly 140 Country radio stations nationwide by millions of listeners.  The program was honored with its third ACM Award in 2018 for “National On-Air Personality of the Year,” following a 2017 CMA Award in the same category. In 2017, Bones was also the youngest personality to be elected to the National Radio Hall of Fame.  He was voted “Best Radio DJ” by readers of The Tennessean in 2013, 2014 and 2015, and he made Nashville Lifestyles’ “25 Most Beautiful People” list in 2013.

In addition to his weekday program, Bones is host of the weekend Country countdown show, Country Top 30 with Bobby Bones.  The four-hour music program airs nationwide on approximately 160 affiliates and features hosts Bones, Amy and Lunchbox as they showcase the top Country songs and go beyond the music to share conversations with the artists.

In 2018, Bones was named Vice President, Creative Director of iHeartCountry.  In this expanded role, he works with iHeartMedia on a variety of joint ventures and new creative programming initiatives, including executive producing a new one-hour weekend program, Women of iHeartCountry. Co-hosted by Bones and Amy, Women of iHeartCountrylaunched in September 2018 and features music from established female artists and up-and-comers, with weekly guest appearances by other iHeartMedia female on-air personalities. The program airs on more than 130 iHeartCountry radio stations nationwide, in addition to iHeartRadio.

Bones is also half of The Raging Idiots, a comedy band with his radio producer Eddie that plays shows all over the U.S., and has raised millions of dollars to benefit various charitable causes. The duo has performed with Jason Aldean, Dierks Bentley, Florida Georgia Line, Brad Paisley and Toby Keith. Signed to Black River Entertainment in 2015, the band’s first full-length album, The Critics Give It 5 Stars, debuted at No. One on the Comedy Albums Chart and landed in the Top 5 of Billboard’s Country Album Chart.  The group’s superstar friends Kelsea Ballerini, Lindsay Ell, Charles Kelley, Brad Paisley, Carrie Underwood and more are featured on the album that takes satirical and deliberate cues from today’s popular music. The band also released The Raging Kidiots: Kiddy Up! in 2016, which debuted as the top downloaded children’s album and was born from the success of the No. One EP, The Raging Idiots Presents – The Raging Kidiots.

In May 2016, HarperCollins released Bare Bones: I’m Not Lonely If You’re Reading This Book, a touching, funny, heart-wrenching, and triumphant memoir.  The book takes fans on an authentic, raw and hilarious tour of his journey from growing up in Mountain Pine, Arkansas to becoming one of the leading Country radio personalities in the U.S.  It spent four weeks on the New York Times Bestsellers List and claimed the No. One spot on multiple lists including USA Today and Wall Street Journal. His latest book, Fail Until You Don’t: Fight. Grind. Repeat. was released in June 2018, and experienced overwhelming response, debuting at No. 1 on the New York Times Best Sellers List.

In April 2018, Bones made his debut on ABC TV’s American Idol reboot as a mentor for the top 24 contestants, helping them reach the next level in their artistry and performances. He will return as an in-house mentor for the 2018-2019 season of the beloved singing competition series. In 2018, Bones also competed on Season 27 of Dancing with the Stars, and he took home the coveted mirror ball trophy with partner Sharna Burgess.  In addition to performing some of his fan-favorite routines from the hit ABC-TV show as part of the Dancing with the Stars: Live – A Night to Remember tour, Bones is hitting the road to bring his hilarious stand-up comedy to fans across the country. He’s delivering a fresh batch of jokes on his Bobby Bones Red Hoodie Comedy Tour, which also features musical guests, as well as an opening comedy bit from The Bobby Bones Show‘s Mike D. The Bobby Bones Red Hoodie Comedy Tour follows Bones’ in-demand Funny & Alone Tour, touted as “one we’d see time and time again” (Sounds Like Nashville), selling out more than 20 shows last year. For more information visit: www.BobbyBonesComedy.com.

With no signs of slowing down, Bones’ popular podcast, BobbyCast has been downloaded more than 6 million times. Bones sits down with top artists and songwriters – Kelsea Ballerini, Dierks Bentley, John Mayer and Chris Stapleton to name a few – for in-depth personal interviews. The podcast’s overwhelming success paved the way for Bones to launch the Nashville Podcast Network, an eclectic collection of podcasts from a variety of Nashville-savvy hosts, giving listeners an inside look at the lifestyle and pop culture in Nashville.

Bobby Bones has been dubbed “the most powerful man in country music” by Forbes magazine, and he puts that star power to good use by supporting numerous charitable initiatives.  He was elected to the Board of Directors for Musicians On Call in 2016, and has helped raise millions of dollars for many worthy causes, including nearly $8 million for St. Jude’s Children’s Hospital®.

Bones has appeared in both movies and on television, including Bandslam with Vanessa Hudgens, the TODAY show, The Talk on CBS, Fox & Friends, CNN, Live! with Kelly Ripa as a guest host, and Headline News and FOX Business’ Kennedy as a recurring guest.