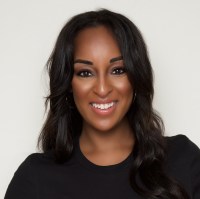 Natasha S. Alford is an award-winning journalist, digital host, and millennial media executive. As Vice President of Digital Content and a Senior Correspondent at theGrio, she leads a national team in reporting the most critical news and issues impacting the African-American community. Her work has appeared in The New York Times, The Guardian, and Oprah Mag, and she’s been a guest contributor on MSNBC, The Breakfast Club, and Sirius XM.

In 2020, Natasha was selected for the Poynter Leadership Academy for Women in Media, and in 2018 was named NABJ Emerging Journalist of the Year, and Rolling Out Magazine’s “Leading Lady in Media.”

In 2017 she received the Harvard “Rising Leader” Women’s Leadership Award for her work at theGrio.

Natasha holds a master’s degree in broadcast journalism from Northwestern University’s Medill School of Journalism and a B.A. from Harvard University.  She is the executive producer of the Pulitzer Center-sponsored documentary “Afro-Latinx Revolution: Puerto Rico,” and is producing another documentary for Entertainment Studios about the story of the Black Panthers’ Angola Three.